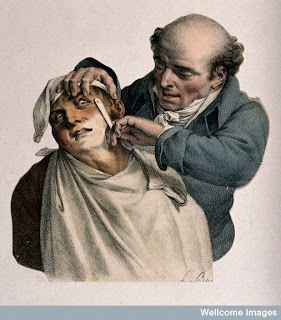 Seminar in our History of Pre-Modern Medicine series takes place next week.

By the mid eighteenth century, facial hair fell dramatically from favour as the face of the polite gentleman was increasingly clean-shaven. The arrival of the newly-invented cast steel enabled razor-makers to produce ever sharper (and indeed blemish-free) blades, rendering shaving more comfortable, and razors more durable and capable of re-sharpening.
Razor-makers increasingly advertised their wares in popular publications and, importantly, began to target domestic consumers, rather than professional barbers. Little has yet been done to explore the various contexts of shaving and, in particular, the status of razors as items of both utility and ‘fashion’.
But razors were also a conduit for broader, societal expectations of civility and social order; they helped to define and shape concepts of cleanliness and civility. Shaving the face evinced neatness and elegance, and notionally separated the gentleman from the unkempt yokel.
Shaving the head prepared it for the wearing of a wig – an expression of gentlemanliness, masculinity and taste. Equally, shaving also dovetailed with (albeit declining) humoural medical notions of ridding the body of internal detritus. As such it sits astride various discourses of understanding the body and the self, and the spread and importance of new technologies. This paper will look anew at the practice of shaving, the market for shaving accoutrements, and the various contexts through which the removal of facial hair was understood and articulated.

Wellcome Library, 2nd floor, 183 Euston Road, NW1 2BE.
Please deposit bags and coats in the ground floor cloakroom and meet in the 2nd floor foyer.
Doors at 6pm prompt, seminar will start at 6.15.

The seminar is the fourth in a new series organised by a group of historians of medicine based at London universities and hosted by the Wellcome Library. The series will be focused on pre-modern medicine, which we take to cover European and non-European history before the 20th century (antiquity, medieval and early modern history, some elements of 19th-century medicine).

A full list of all the seminars in the series is available here:
http://libraryblog.wellcome.ac.uk/libraryblog/2012/11/history-of-pre-modern-medicine-seminar-series-2012-13/